What Are Orthotics and Do I Really Need Them?

Approximately 67% of people overpronate (their feet roll in too much when they walk or run) and in simple terms orthotics are designed to help support your feet and prevent issues like this from occurring. Custom Orthotics are the ultimate form of orthotic in that they are custom designed and fitted to your feet!

Maybe you’re not in that 67% of people, or maybe you experience other lower body pains, so the question you’re asking yourself is do you really need custom orthotics and how do they work? 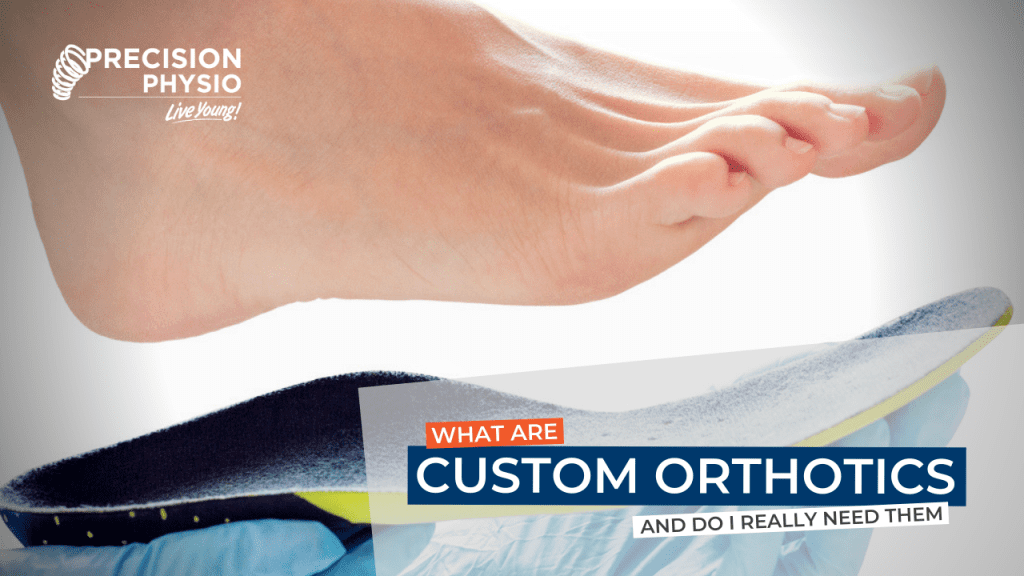 Orthotics are special inserts made to go in your shoes. These inserts are custom-made and moulded to the shape of your feet.

Usually prescribed by a doctor, orthotics are an effective tool to help treat foot, leg, or back problems, and are something that we can mould, produce and fit for you at Precision Physio.

How to know if you need Orthotics?

Generally speaking the use of orthotics is as part of a wider treatment plan and not a one-size fits all silver bullet.

People who present with persistent pain or discomfort in their feet and legs are more likely to be considered for orthotics, however it’s not a set course of action and a doctor or physiotherapist is best trained to determine if they will be effective.

When advising the use of orthotics, we’re commonly trying to treat ailments, or support issues such as:

Some people will often first try buying off the shelf shoe inserts from sports stores or chemists, it’s worth noting though that there is a big difference between a generic insert like that and a highly tailored orthotic that has been specifically designed and moulded to your foot.

What conditions are Orthotics used to treat?

Orthotics can be used to help treat a number of medical conditions, some example of these are:

Orthotics may also be prescribed to people with long-term leg and feet issues such as variances in size.

As previously stated, orthotics tend to form a part of a treatment plan, not the whole plan. At Precision Physio, we will regularly produce and fit orthotics whilst also working with people on existing injuries and improving their movement patterns using prescribed exercise.

What the orthotic can effectively do is to support your feet and maintain them in more desired positions throughout the day, without you having to be constantly aware of what you’re doing.

The orthotic might promote a certain roll pattern when you’re walking or running, or they may support very low or high arches in your feet.

Having the correct support for your feet will improve the body’s ability to use other joints correctly, possibly better cushioning you in key areas or allowing you to better load in certain movements.

The orthotic is used to help try and avoid more drastic actions such as surgery on more extreme cases.

How we fit Orthotics at Precision Physio?

Firstly we will assess you to help you to understand your diagnosis – what is causing your pain and what are all the reasons why you are having your problem.

This session uses a force plate which shows the forces going through each foot whilst you are walking and standing still. The therapist will then run through the results of the scan with you to help you understand the issues that may be caused by your feet.

Based on the findings from your assessment and the GaitScan, your therapist will order your custom orthotic to the exact specifications based off on your GaitScan results.

Once they have been made, your therapist will then fit the orthotic and check that it not only fits properly, but is also effective in correcting the biomechanics of the foot. If any revisions are required, this will be sorted by the therapist and we won’t stop until you are 100% satisfied with the result.

Orthotics as part of a wider treatment plan, can be very effective and we’ve seen many people achieve great results through wearing them.

The process to have them fit is a straightforward one and wearing them in your shoes allows your body support without you needing to be conscious of what you’re doing.

Whilst not a guaranteed solution, they should definitely be considered if you are struggling with the type of pains listed above.

Custom fit orthotics are very different from off the shelf one size fits all solutions and if you’re advised to get orthotics or wondering if they will help you, please contact us at Precision Physio and we’d be more than happy to advise you.

How Do I Book An Appointment with Precision Physio for Help?

We’re taking the health of our clients, members and staff very seriously and our preference would be for you to call to book an appointment so that we can make sure to explain our approach to keeping you safe. You can call any of these numbers to schedule a session: